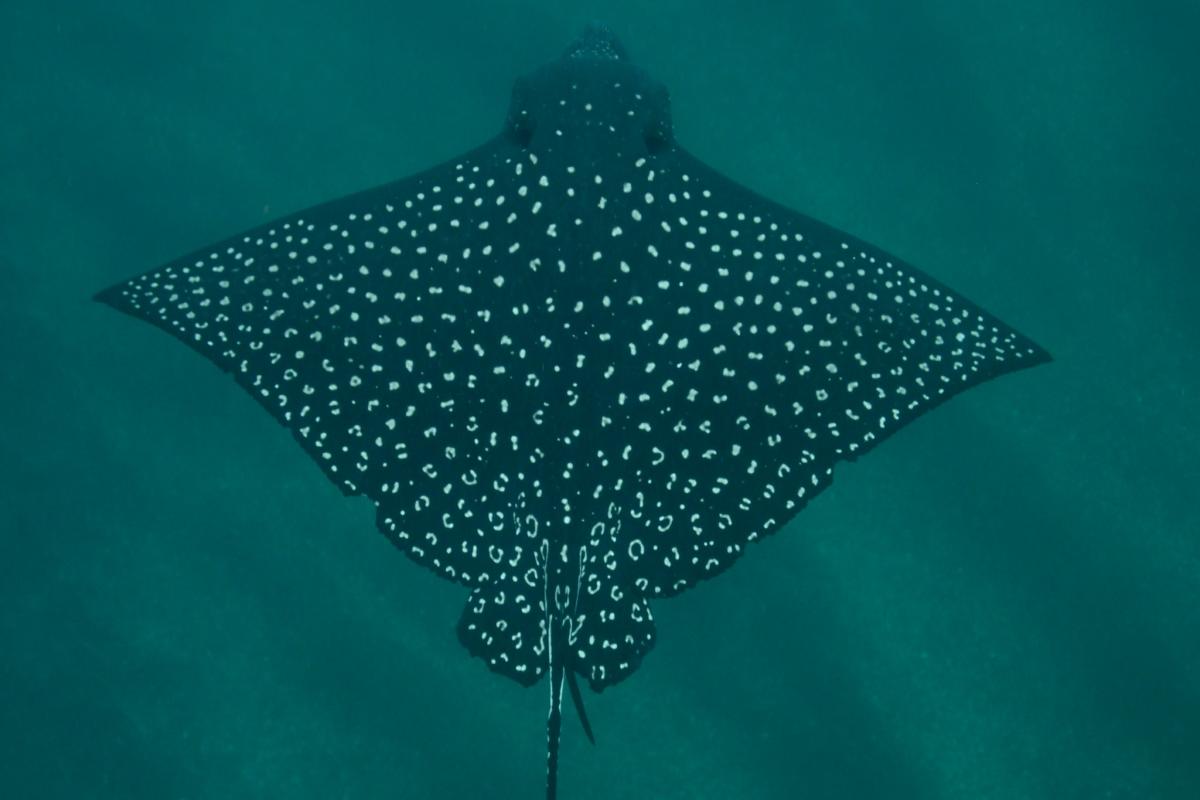 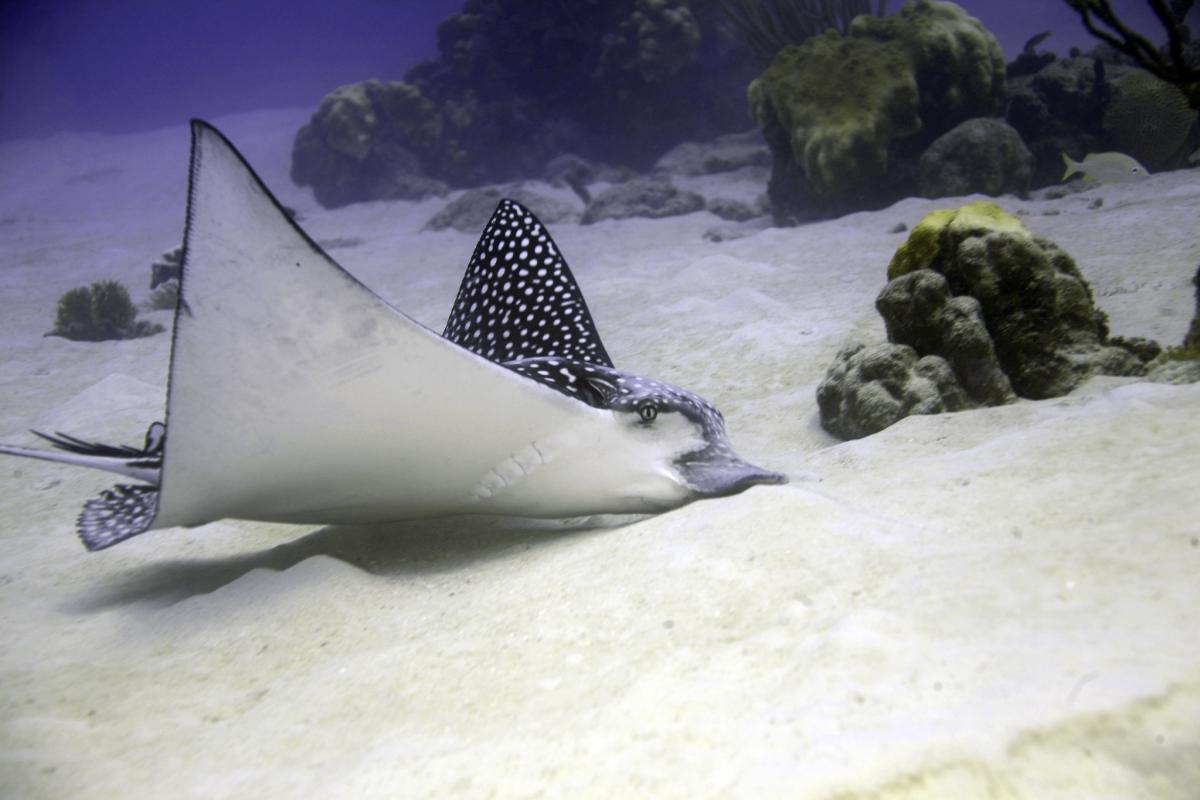 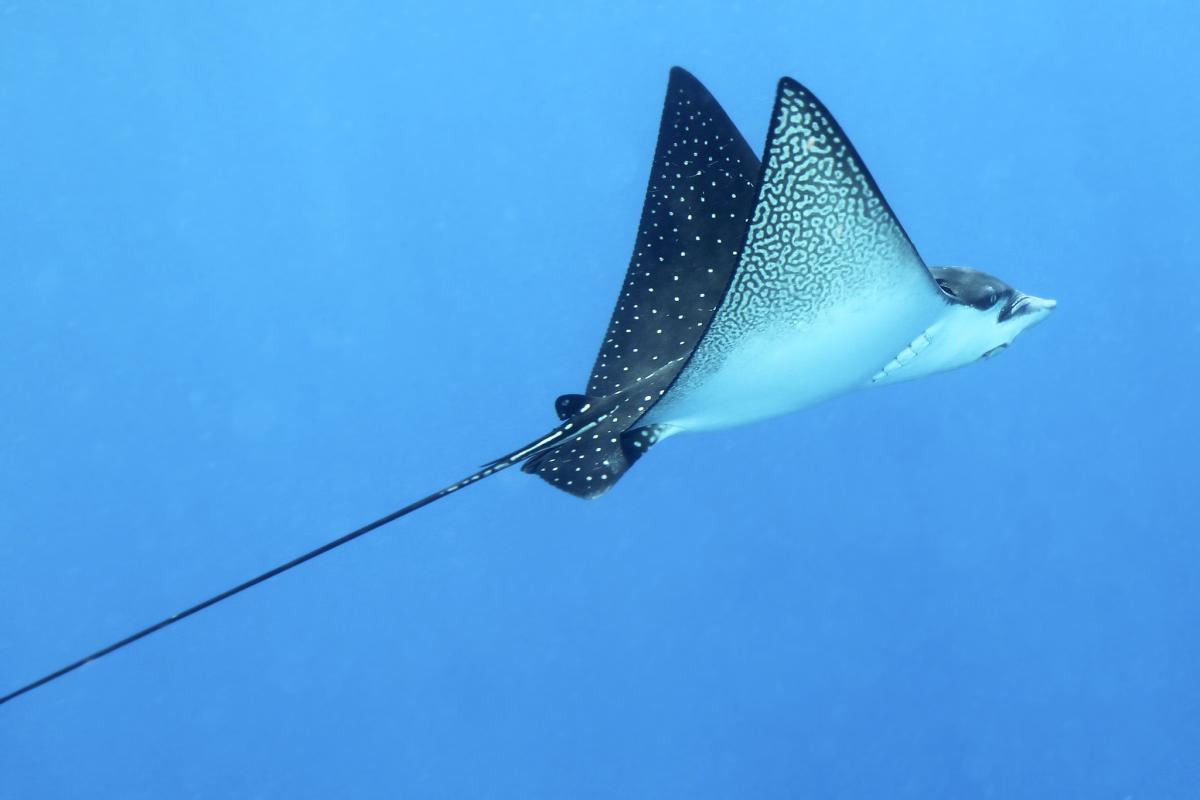 Spotted eagle rays have flat disk-shaped bodies, are deep blue or black with white spots on top with a white underbelly, and distinctive flat snouts similar to a duck's bill.Their tails are longer than those of other rays and may have 2–6 venomous spines just behind the pelvic fins. The front half of the long and wing-like pectoral disk has five small gills in its underside. Mature spotted eagle rays can be up to 5 meters (16 ft) in length; the largest have a wingspan of up to 3 meters (10 ft) and a mass of 230 kilograms (507 lb). One male, or sometimes several, will pursue a female. When one of the males approaches the female, he uses his upper jaw to grab her dorsum. The male will then roll the female over by grabbing one of her pectoral fins, which are located on either side of her body. Once he is on her ventral side, the male puts a clasper into the female, connecting them venter to venter, with both undersides together. The mating process lasts for 30–90 seconds.The spotted eagle ray develops ovoviviparously; the eggs are retained in the female and hatch internally, feeding off a yolk sac until live birth.After a gestation period of one year the mother ray will give birth to a maximum of four pups. When the pups are first born, their discs measure from 170–350 millimeters (6.7–13.8 in) across. The rays mature in 4 to 6 years.Spotted eagle ray preys mainly upon bivalves, crabs, whelks, benthic infauna they also feed on mollusks, crustaceans, particularly malacostracans, and also upon hermit crabs, shrimp, octopi, and some small fish.The spotted eagle ray's specialized chevron-shaped tooth structure helps it to crush the mollusks' hard shells. The jaws of these rays have developed calcified struts to help them break through mollusk shells by supporting the jaws and preventing dents from hard prey. These rays have the unique behavior of digging with their snouts in the sand of the ocean.  While doing this, a cloud of sand surrounds the ray and sand spews from its gills. One study has shown that there are no differences in the feeding habits of males and females or in rays from different regions of Australia and Taiwan.